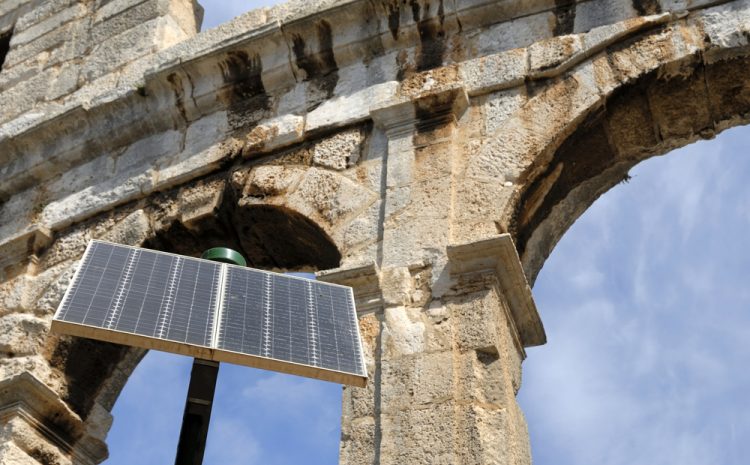 Solar panel, which convert sunlight into electrical current, had their beginnings more than a hundred years ago, though early solar cells were too inefficient to be of much use. In April 1954, researchers at Bell Laboratories demonstrated the first practical silicon solar cell.

Long before the first Earth Day was celebrated on April 22, 1970, generating awareness about the environment and support for environmental protection, scientists were making the first discoveries in solar energy. It all began with Edmond Becquerel, a young physicist working in France, who in 1839 observed and discovered the photovoltaic effect— a process that produces a voltage or electric current when exposed to light or radiant energy. A few decades later, French mathematician Augustin Mouchot was inspired by the physicist’s work. He began registering patents for solar-powered engines in the 1860s. From France to the U.S., inventors were inspired by the patents of the mathematician and filed for patents on solar-powered devices as early as 1888.

Several decades later, in 1873, Willoughby Smith, an English engineer, discovered the photoconductivity of selenium while testing materials for underwater telegraph cables. In 1883, American inventor Charles Fritts made the first solar cells from selenium. Though Fritts had hoped his solar cells might compete with Edison’s coal-fired power plants, they were less than one percent efficient at converting sunlight to electricity and thus not very practical.

In 1881, the American inventor Charles Fritts created the first commercial solar panel, which was reported by Fritts as “continuous, constant and of considerable force not only by exposure to sunlight but also to dim, diffused daylight.” However, these solar panels were very inefficient, especially compared to coal-fired power plants.

In 1939, Russell Ohl created the solar cell design that is used in many modern solar panels. He patented his design in 1941.

In 1954, this design was first used by Bell Labs to create the first commercially viable silicon solar cell.

1958 The Vanguard I space satellite used a small (less than one watt) array to power its radios. Later that year, Explorer III, Vanguard II, and Sputnik-3 were launched with PV-powered systems on board. Despite faltering attempts to commercialize the silicon solar cell in the 1950s and 60s, it was used successfully in powering satellites. It became the accepted energy source for space applications and remains so today.

By 1980 solar panel power plants were built with ARCO solar, producing more than 1 megawatt of photovoltaic modules a year. The company helped set up the first megawatt-scale power station in Hisperia, California.

1999 The National Renewable Energy Laboratory achieves a new efficiency record for thin-film photovoltaic solar cells. The measurement of 18.8 percent efficiency for the prototype solar cell topped the previous record by more than 1 percent.

Going solar has never been easier and cheaper than now .

You can go solar with Green Mile Energy , the only thing that you should do is filling

the form in home page and our experts will call you.