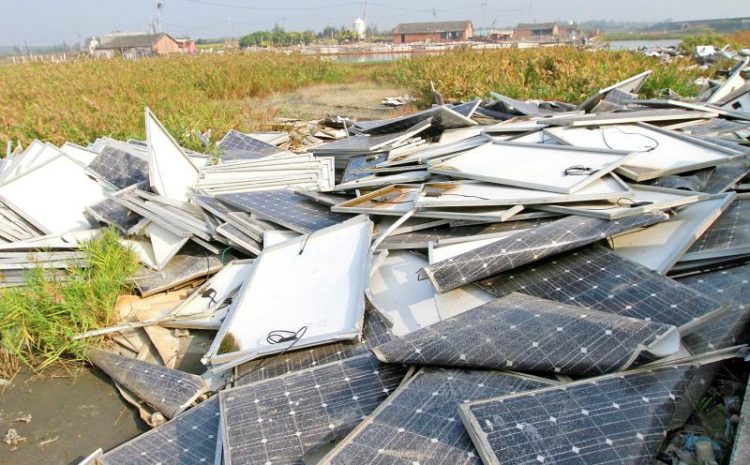 Tons of solar panels installed in the early 2000s are reaching the end of their lifecycles, posing a serious problem for the industry to contend with.

On paper, solar energy seems more promising than ever. Solar cells are becoming easier to produce, along with becoming increasingly compact and portable. But there are a few problems with solar energy that are seldom talked about.

solar panels have an operating lifespan of around 20 to 30 years. Since they were first introduced in the 2000s, literal tons of solar panels are reaching the end of their lifespan. Because it’s not easy to properly dispose of the toxic metals inside the solar cells. it is often cheaper to discard them in landfills or send them to developing countries. As solar panels sit in dumps, the toxic metals they contain can leech out into the environment and possibly pose a public health hazard if they enter the groundwater supply.

The Trouble With Solar Waste

The International Renewable Energy Agency (IRENA) in 2016 estimated there were about 250,000 metric tons of solar panel waste in the world at the end of that year. IRENA projected that this amount could reach 78 million metric tons by 2050.

Solar panels often contain lead, cadmium, and other toxic chemicals that cannot be removed without breaking apart the entire panel. “Approximately 90% of most PV modules are made up of glass,” notes San Jose State environmental studies professor Dustin Mulvaney. “However, this glass often cannot be recycled as float glass due to impurities. Common problematic impurities in glass include plastics, lead, cadmium, and antimony.”

Waste from end-of-life solar panels presents opportunities to recover valuable materials and create jobs through recycling. According to the International Renewable Energy Agency, by 2030, the cumulative value of recoverable raw materials from end-of-life panels globally will be about $450 million, which is equivalent to the cost of raw materials currently needed to produce about 60 million new panels. Diverting solar panels from landfills to recycling saves space in landfills in addition to capturing the value of the raw materials.

How Solar Panels are Recycled

Crystalline-silicon solar technology represents most of the solar panel market share. This type of panel is constructed with an aluminum frame, glass, copper wire, polymer layers and a back sheet, silicon solar cells, and a plastic junction box.

Many of these components can be recycled. Glass composes most of the weight of a solar panel (about 75 percent), and glass recycling is already a well-established industry. Other materials that are easily recyclable include an aluminum frame, copper wire, and plastic junction boxes.

Other materials located within the solar cells may be more difficult to recycle. Silver and internal copper are valuable components, but panels typically contain very small amounts of these materials. Toxic metals like lead and cadmium may also be present in solar panels.

Solar panels may contain critical materials, including aluminum, tin, tellurium, and antimony, as well as gallium and indium in some thin-film modules.

There are two main types of solar panels, requiring different recycling approaches. Both types—silicon-based and thin-film based—can be recycled using distinct industrial processes. Currently, silicon-based panels are more common, though that does not mean that there would not be great value in the materials of thin-film-based cells.

Research studies conducted on the topic of recycling solar panels have resulted in numerous technologies. Some of them even reach an astonishing 96% recycling efficiency, but the aim is to raise the bar higher in the future.

The recycling process of silicon-based PV panels starts with disassembling the actual product to separate aluminum and glass parts. Almost all (95%) of the glass can be reused, while all external metal parts are used for re-molding cell frames. The remainder materials are treated at 500°C in a thermal processing unit to ease up the binding between the cell elements. Due to the extreme heat, the encapsulating plastic evaporates, leaving the silicon cells ready to be further processed.

After the thermal treatment, the green hardware is physically separated. 80% of these can readily be reused, while the remainder is further refined. Silicon particles—called wafers—are etched away using acid. Broken wafers are melted to be used again for manufacturing new silicon modules, resulting in 85% recycling rate of the silicon material.

Additionally, a recent discovery in solar technology may do away with silicon altogether by using a material called perovskite. Instead of silicon crystals, perovskite solar cells are made of metal crystals, usually, lead. The raw materials and synthesis for lead perovskite cells are much cheaper than the high-purity silicon needed for traditional solar panels. This means they are much more cost-effective to make. China is making them with lead from recycled batteries.

The future of solar energy

There are only a few ways to make silicon solar cells, but there are many ways to make perovskite cells, yielding unique solar panels for different applications. But what’s most promising is that even though they’re easier and greener to make, perovskite cell efficiency already rivals that of silicon cells. And there’s no need to worry about the lead content, either. Research already shows that perovskite cells based on nontoxic metals like tin or germanium are approaching the efficiency of the ones with lead.

Not only will PV recycling create more green job opportunities but also approximately £11 billion in recoverable value by 2050. This influx will make it possible to produce 2 billion new panels without the need to invest in raw materials. This means that there will be the capacity of producing around 630 GW of energy just from reusing previously used materials.

Thanks to constant solar energy price drop, more and more households and businesses choose to invest in solar power systems. As a result, even more, economic opportunities in the solar cell recycling sector will emerge.