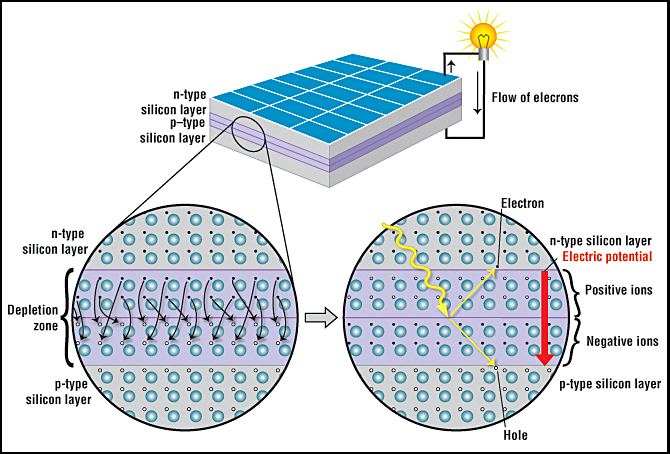 A solar cell is made of two types of semiconductors, called p-type and n-type silicon. The p-type silicon is produced by adding atoms such as boron or gallium that have one less electron in their outer energy level than silicon does.  Because boron has one less electron than is required to form the bonds with the surrounding silicon atoms, an electron vacancy or “hole” is created.

The n-type silicon is made by including atoms that have one more electron in their outer level than silicon, such as phosphorus. Phosphorus has five electrons in its outer energy level, not four. It bonds with its silicon neighbor atoms, but one electron is not involved in bonding. Instead, it is free to move inside the silicon structure.

What are solar panels made of?

The solar panel manufacturing process brings together six different components to create a functioning solar panel. These parts include silicon solar cells, a metal frame, a glass sheet, a standard 12V wire, and a bus wire.  Here are the common parts of a solar panel explained:

Silicon solar cells convert the Sun’s light into electricity using the photovoltaic effect. Soldered together in a matrix-like structure between the glass panels, silicon cells interact with the thin glass wafer sheet and create an electric charge.

A solar panel’s metal frame is useful for many reasons; protecting against inclement weather conditions or otherwise dangerous scenarios, and helping to mount the solar panel at the desired angle.

The glass casing sheet is usually 6-7 millimeters thick, and although it is thin, it plays a big role in protecting the silicon solar cells inside.

In addition to the solar cells themselves, a standard solar panel includes a glass casing at the front of the panel to add durability and protection for the silicon PV. Under the glass exterior, the panel has a casing for insulation and a protective back sheet, which helps to limit heat dissipation and humidity inside the panel.

A 12V wire helps regulate the amount of energy being transferred into your inverter, aiding with the sustainability and efficiency of the module.

Bus wires are used to connect the silicon solar cells in parallel. They are covered in a thin layer of solder for easy soldering and are thick enough to carry electrical currents.

Why Are Solar Panels Made? With Silicone?

With silicone being the predominant material used to create solar panels, the natural question to ask is: why? Silicone has been used as the semiconductor material of solar PV panels for the majority of the solar industry’s history.

When investigating all possible materials on the periodic table, developers of early and modern solar panels all found that silicone boasted many ideal properties that made it the perfect candidate for this semiconductor material:

Silicone is abundantly available and affordable as an elemental material, making it good for large-scale systems.

Chemically and electronically speaking, silicone is quite easy to optimize for the photovoltaic effect that efficiently converts sunlight into electricity.

Solar panels are a great way to reduce your carbon footprint and save money on your energy bill. If you’re considering installing solar panels, be sure to do your research and find a reputable company to install them for you. With the right company, you can rest assured that your solar panels will be installed correctly and will provide you with years of savings on your energy bill.